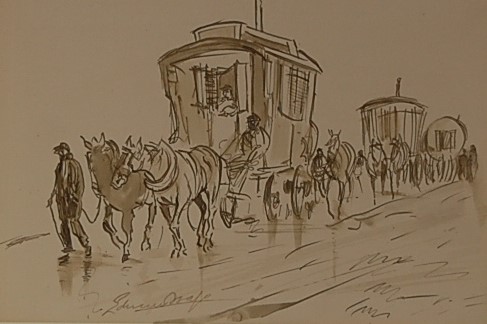 Edward Seago is one of the best loved and most well known painters of the Twentieth Century. His were among the first exhibitions for which people queued, notably at Colnaghi’s in 1945 and then at Marlborough Fine Art, while other prestigious galleries the world over have successfully exhibited Seago’s work ever since.

The level of worldwide popularity is all the more remarkable when one often reads of Seago being described as a very english painter. True, he was brought up in East Anglia, studied under Sir John Arnesby Brown and embraced many of the values of the Norwich School painters; but, as James Reid, his biographer, has said, while Seago’s subject matter evolved within a fundamentally traditional genre, his methodology, style and technique contributed to an innovative interpretation of the rural, urban and marine scene.

This innovative interpretation, applied to landscapes around the world, relied on a wonderfully fluid and refreshing use of paint. The work is recognisably spontaneous – a moment captured in oil or watercolour, retaining the essential mood of the occasion whether vibrant or reflective.

Edward Seago was essentially a self-taught artist. He was given guidance by Sir Alfred Munnings and Betram Priestman but developed his skill and technique from studying the British masters such as Constable.

As a young artist Seago was fascinated (like Munnings and Dame Laura Knight) by the Circus and the life of travellers. Seago even joined the Circus for a period. He was also interested in the stage and ballet but in time his love of pure landscape took priority.

Seago enjoyed generous patronage from numerous members of The Royal Family. He was one of the official artists appointed to paint the Queen’s Coronation and was invited by The Duke of Edinburgh on an expedition to Antarctica. Prince Philip and Seago painted alongside each other on the deck of the Royal Yacht Britannia and became close friends.