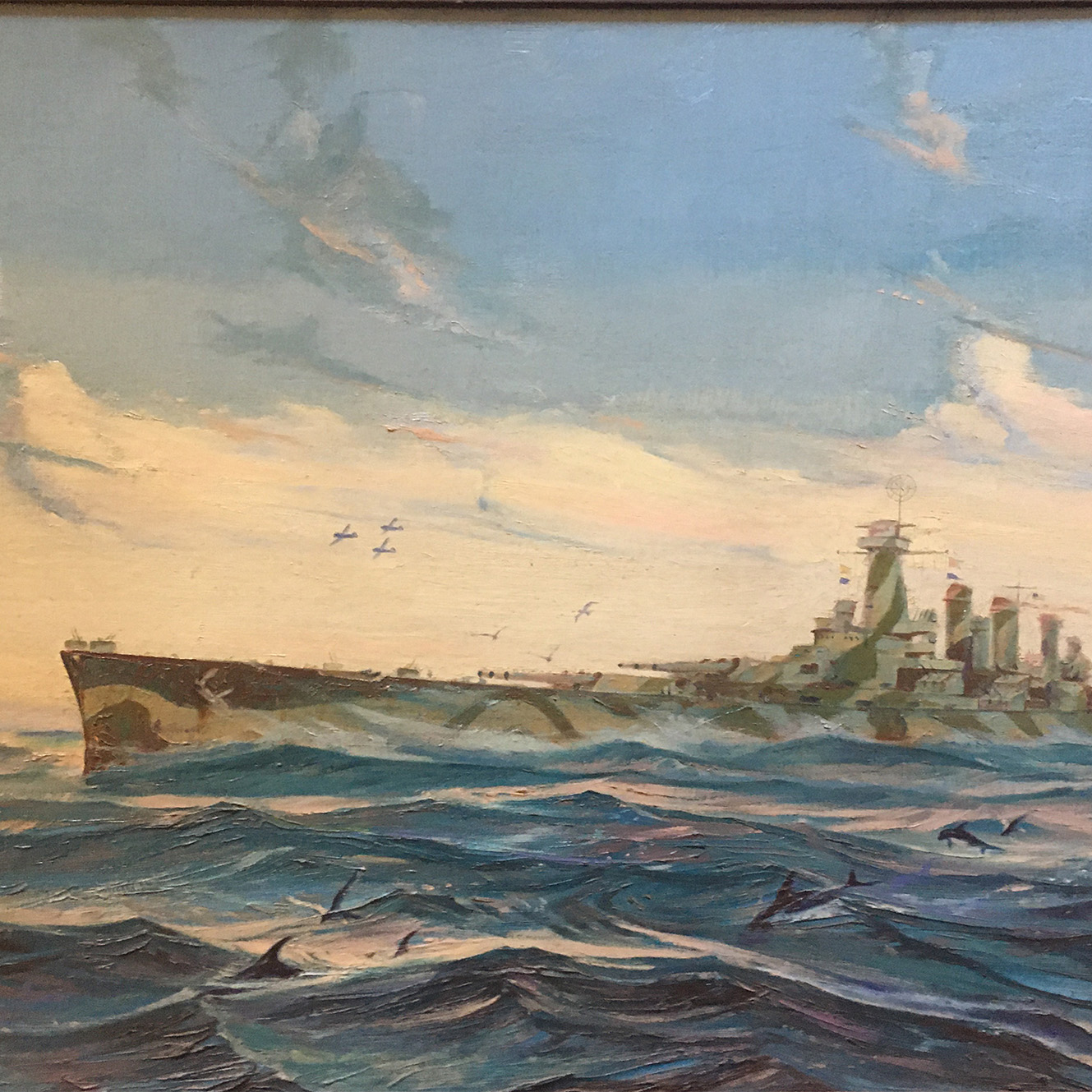 Sir Norman Wilkinson CBE was a British artist who worked in oils, watercolours and drypoint. He was primarily a marine painter, but he was also an illustrator, poster artist and wartime camoufleur. It is commonly claimed that, during World War 1, it was he who first proposed the use of disruptive colouration in naval camouflage, for which he coined the well-known term “dazzle painting”.

Wilkinson was born in Cambridge and attended school at Berkhamstead in Hertfordshire and at St Paul’s Cathedral Choir School in London. His early artistic training occurred in the vicinity of Portsmouth and Cornwall, and at Southsea School of Art, where he was later a teacher. He also studied with seascape painter Louis Greer. At age 21 he studied figure painting in Paris, but by then he was already interested in maritime subject matter.

His illustration career began in 1898 when his work was first accepted by the Illustrated London News, for which he then continued to work for many years. He also designed numerous posters for the London and North Western Railway, and the London Midland and Scottish Railway.

It was while serving in the Royal Naval Volunteer Reserve during World War 1 that he was assigned to submarine patrols. That was when, in a flash of insight, he thought of how to respond to the submarine threat. After initial testing, Wilkinson’s plan was adopted by the British Admiralty, and he was placed in charge of a naval camouflage unit, housed in basement studios at the Royal Academy of Arts.

In 1906 Wilkinson was elected to the Royal Institute of Painters in Water Colours. He was a member of the RBA, RI, ROI and RSMA. He was knighted and appointed a Commander of the British Empire in 1948.

One of the finest marine painters of the century, his work is represented in all of the major collections including the National Maritime Museum.
Wilkinson created for the first class smoking room of the RMS Titanic a painting entitled “Plymouth Harbour” which perished when the ship went down.

This is absolutely typical of his work, very stylised and the subject that was dear to his heart. 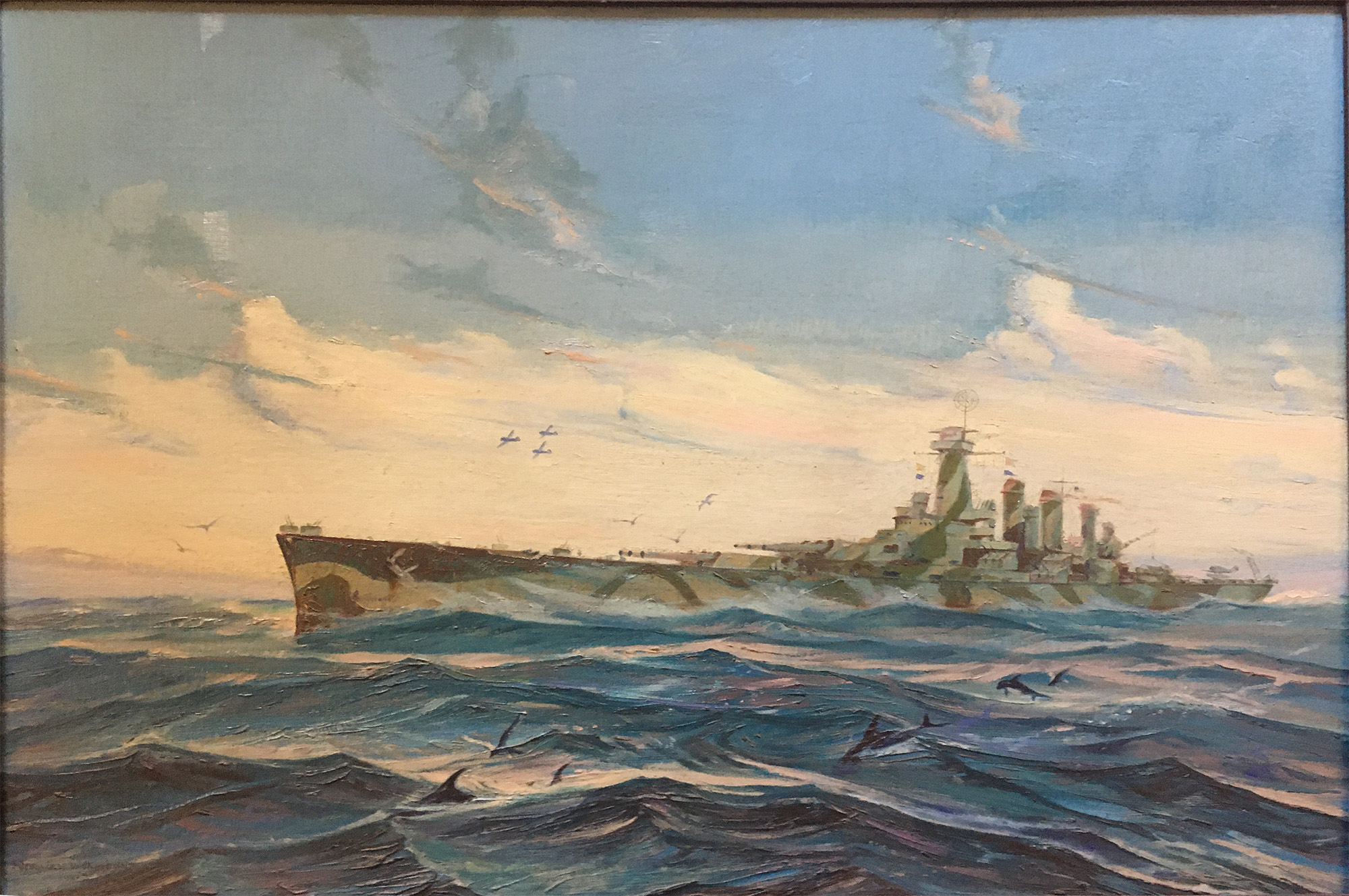 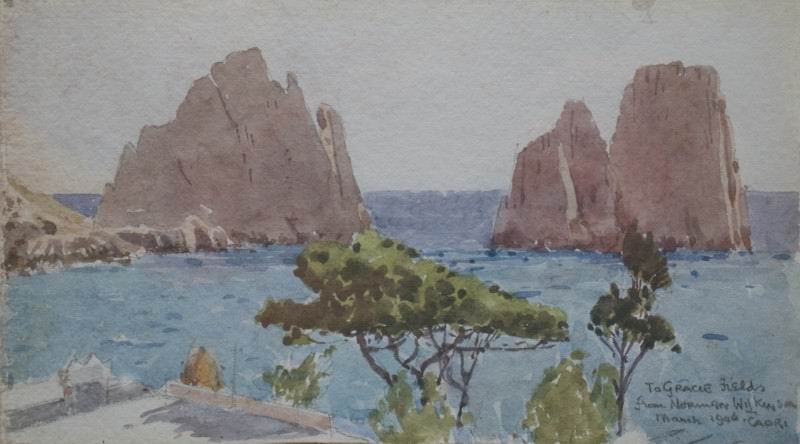